Byun Hyuk’s Love (변혁의 사랑), also known as Revolutionary Love is the new drama airing on tvN. This drama started airing on October 14, 2017 and will air every Saturday and Sunday. This drama is very anticipated because it is starring Choi Siwon (Byun Hyuk), Kang Sora (Baek Joon), and Gong Myung (Kwon Je Hoon). These are 3 very popular actors in Korea, so everyone if very excited to see how this drama turns out! Personal I am just excited because this is the first tvN drama I have watched sense “Bride of the Water God” Anyway, lets just get into the impressions!

I was completely obsessed with Baek Joon(Kang Sora) from the very first scene of this drama. I thought she was such a cool and powerful girl that doesn’t care about the rules and get what she wants. I was even more excited to find out that she only does part-time jobs. Everyone loves a character they can relate with, so I think most people will find Baek Joon’s struggles throughout the drama very relatable. I am really excited to see how her character reacts when she finds out the truth about Byun Hyuk.

I wasn’t really sure how I felt about Byun Hyuk (Choi Siwon) at first. He seemed very crazy and like he didn’t care about anything during the first couple scenes. However, I think that his character will really grow on me. The fact that he is kind of clueless to the normal middle-class world is very cute. I think throughout the drama Baek Joonwill teach him what it is like to live like a normal person, which will be both funny and adorable. During the last scene of the first episode we also got to see the friendship Byun Hyuk has with Kwon Je Hoon (Gong Myung). I think this friendship will be either a huge problem or a huge strength throughout the drama.

Okay, so I have not had second lead syndrome in a VERY long time, but I strongly believe that I will have that throughout this whole drama. Honestly during the whole first episode I was wishing that Kwon Je Hoon(Gong Myung) was actually the main character. I thought he was so sweet, but definitely has a lot of dark/deeper aspects about him that we don’t know yet. He obviously cares WAY more about other people around him then himself. We see this when he follows Baek Joon home, when he says he can’t leave Byun Hyuk’s side, and when he has the flashback about his father. This is something I think will effect Kwon Je Hoon and his decision a lot throughout this drama. I just hope that he will meet someone else throughout the drama, because I don’t want him to be heart broken because his best friend and the girl he likes get together. 😦 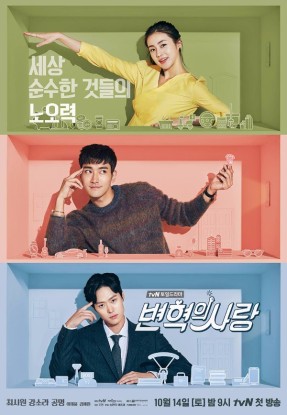 I thought that this was a very strong episode, it gave us a good insight on the personalities and personal struggles of the characters and starting building key relationships. Personally, I am really excited to see how the 3 of them interact together. I think it will be cute to see them all become great friends. I like that this drama is a very funny light heart drama that still has some sad aspects to it! The story seems very interesting and I am excited to see how Byun Hyuk will grow as a person throughout this drama with the help of his new friends. You guys know I love Cinderella stories, and even though this isn’t your traditional Cinderella story it is still close enough^^

Make sure to watch this drama with me every Saturday and Sunday and lets hope and wish that it is a good one!! If you watched the first episode please let me know what your first impressions were^^