Okay, so I was going to write about Chicago Typewriter today, but I feel like I want to prepare and think about what I want to say before I talk about it. So instead, today I am going to talk about the first drama I ever watched!

Hana Yori Dango is a Japanese drama that aired in 2005. The drama is center around Tsukushi Makino, a middle class girl who goes to a fancy high school for wealthy kids. Even though it may seem like a dream to go to this high school, Tsukushi Makino hates every aspect about this high school. She thinks the classes are stupid, the people are rude, and most importantly that F4 are horrible. F4 is a group of 4 of the richest guys in highschool. These 4 boys are named, Tsukasa Domyoji, Rui Hanazawa, Shojiro Nishikado, and Akira Mimasaka. Tsukushi Makino becomes the target of F4 bulling, which leads to many different encounters with F4. Throughout the drama, Tsukushi Makino goes through many different obstacles of friendship, hatred, trust, and love.

This was the first drama I ever watched, and I can honestly say that I couldn’t have picked a better drama to start off my obsession! Every aspect of this drama is amazing and I don’t think there has been a drama that I have watched since this that has surpassed it!

I don’t know about you, but I absolutely love a drama that has a strong and independent female character. Tsukushi Makino is honestly the woman that I aspire to be everyday, she is strong, cute, happy, and stays true to her words and values. Like any other girl I love a cute love story, and before watching this drama I had never seen such a cute and heart wrenching romance.

My Favorite scene from this drama, would definitely be the elevator scene. I loved how it was so unexpected and cute. If you haven’t watched this drama, then make sure when you do that you pay attention to this scene because it will come back, trust me it will.

What makes this drama even better? THERE IS A SEASON 2!!! You finished the last episode of season one and just can’t get enough, then don’t worry because the Japanese entertainment industry has your back! 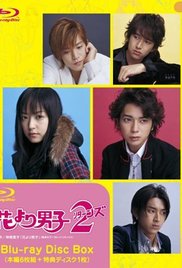 This is the drama that made me so interested in both Japanese and Korean culture, and lead me down the long road of watching so so so many dramas. I hope that if you have never watched any Japanese or Korean dramas that you look into Hana Yori Dango as your first drama!!